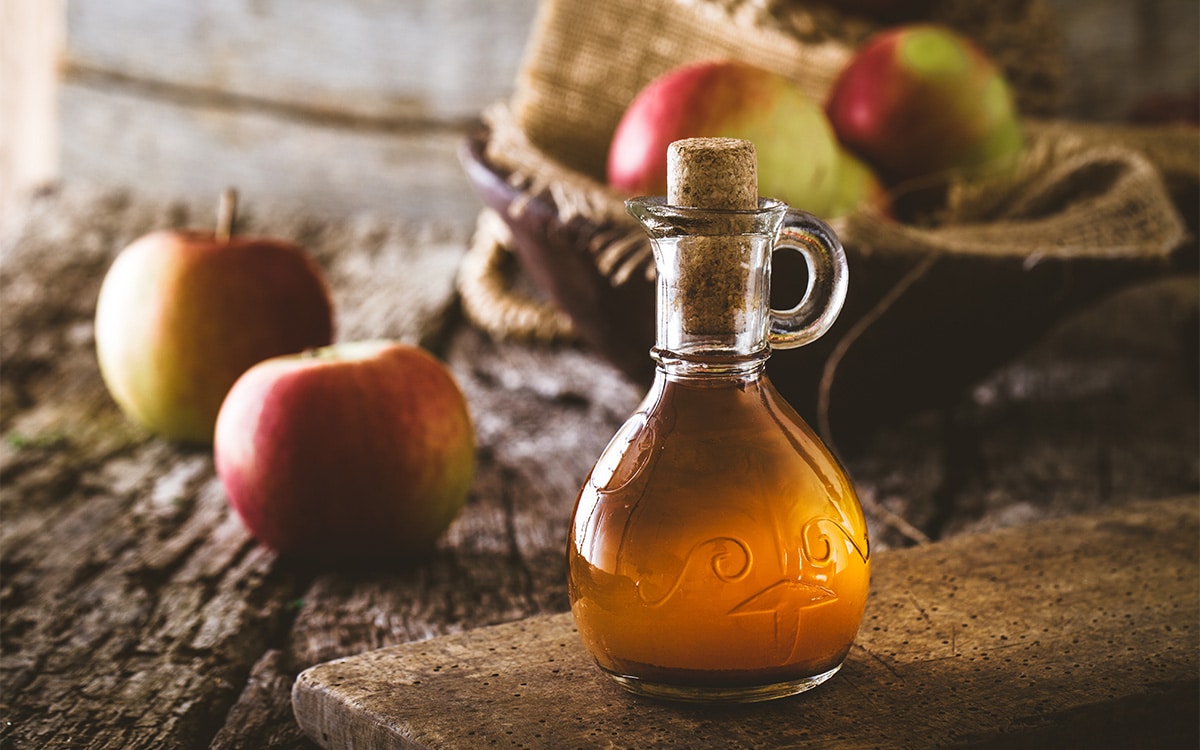 You don’t have to look far to see apple cider vinegar being touted as a health tonic. It seems there’s nothing it can’t do! If you’re looking to lose weight, improve your digestion, treat skin conditions, spice up a salad or even just make your hair shine, you should have a bottle of ACV in your kitchen cupboard.

Let’s take a closer look at all of these benefits – plus many more that you may not have even heard of yet.

What is Apple Cider Vinegar?

As the name suggests, apple cider vinegar is made from the juice of apples. The process involves chopping apples, covering them with water, adding some sugar, and leaving them at room temperature.

The sugars will ferment and form apple cider, and then eventually apple cider vinegar. It’s a natural fermentation process that can be completed at home without any special equipment or probiotic starter.

During this fermentation process, strands of bacteria called ‘the mother’ will form in the cider. The mother is actually the source of ACV’s health benefits, which is why you should always choose a product that contains it (some manufacturers strain it out).

The “mother” can also be used to create the next batch of cider. It’s also a rich source of nutrients including proteins, enzymes, and beneficial bacteria. It’s these nutrients that give ACV its murky appearance – and its many health properties.

What’s The Difference Between Apple Cider Vinegar and White Vinegar?

For a start, white vinegar (also known as distilled vinegar) is clear, while apple cider vinegar is generally brown or honey-coloured.

Standard white vinegar is made by fermenting grain alcohol. It contains around 4-7 percent acetic acid and 93-96 percent water, and it’s mostly used for pickling, cooking, and baking.

Apple cider vinegar, on the other hand, contains around 6 percent acetic acid and 94 percent water. While few scientific studies have been conducted, there are many anecdotal reports of ACV’s benefits in treating everything from indigestion to diabetes and high cholesterol.

Prebiotics are indigestible fiber present in certain vegetables and fruits that cannot be broken down by your normal digestive function. Instead, they provide a kind of ‘food’ for the healthy bacteria in your gut, which is very important for maintaining overall gut health.

It has been suggested that because apple cider vinegar contains pectin from apples, it can also function as a prebiotic. Pectin is a type of prebiotic found in the skin of apples and makes up around 50% of an apple’s total fiber content. Although there is some pectin present in ACV, the fermenting process reduces it to a very small amount.

However, ACV does contain probiotic bacteria that can help to rebalance levels of bad bacteria or yeast in the gut. This bacterial or yeast overgrowth that can cause unpleasant symptoms associated with gut dysbiosis, such as gas and bloating. At least one animal study has shown that ACV can increase the effectiveness of probiotic supplements. (X)

The ‘mother’ in ACV also contains a variety of enzymes, which can help with breaking down the food you eat. Many everyday foods in the Western diet lose their natural enzymes during cooking or processing, so a supplementary source such as apple cider vinegar can help to make up for this.

Those trying to lose excess weight may benefit from including ACV in their diet.

A 2018 report published in the Journal of Functional Foods described apple cider vinegar as a potential aid for weight loss when used in conjunction with a restricted-calorie diet.

Studies involving obese animals have led researchers to suggest that the acetic acid in ACV may help to prevent fat deposition in the body, while also boosting metabolism.

One Japanese study published in 2009 involved 175 people who were given a drink containing either 1-2 tablespoons of vinegar each day, or a drink with no vinegar. After three months, those who consumed the vinegar were found to have lost around 2-4 pounds, while those who drank no vinegar had not. The vinegar groups also showed lower triglyceride levels than the non-vinegar group. (1)

The acetic acid content of ACV may help reduce the absorption of starches and slow down the rate of digestion. This can increase a feeling of fullness in the stomach, causing you to eat less. It’s also been suggested that acetic acid can increase your body’s energy expenditure and fat burning abilities while reducing fat storage.

One of ACV’s best-known benefits is its ability to balance blood sugar levels. This is beneficial for patients with poor blood sugar control, as well as those with type 2 diabetes.

ACV appears to improve both blood sugar and insulin levels. A study published by the American Diabetes Association investigated the effects of apple cider vinegar on patients with insulin resistance or type 2 diabetes.

Fasting patients drank either ACV or a placebo drink each day before a meal. It was found that the ACV drink significantly increased the patients’ insulin sensitivity in those with insulin resistance and slightly improved levels in those with type 2 diabetes.

The researchers concluded that vinegar may be a useful remedy for improving postprandial insulin sensitivity in insulin-resistant people. They suggested that the acetic acid in ACV can suppress disaccharidase activity and raise certain glucose concentrations in skeletal muscle. This is a similar function to the diabetes drug metformin. (2)

Another study showed that ACV can boost insulin sensitivity by 19-34 percent if taken during a high-carb meal. It also appeared to reduce blood sugar and insulin response. There is more evidence to suggest that ACV can improve the effectiveness of insulin in the body as well as lower blood sugar levels after meals.

4. ACV May Support Your Keto Diet

ACV may be useful for those following a high-fat, low-carb, keto diet. It’s been suggested that ACV can improve mitochondrial efficiency, and therefore boost natural energy levels. This effect comes with achieving ketosis, the metabolic state in which your body burns fat for fuel instead of glucose.

New research has linked acetic acid and ketosis to the function of the mitochondria – the ‘engine’ of your cells. It’s believed that when your body is in ketosis, apple cider vinegar helps to boost the number of mitochondria in your cells by stimulating a specific metabolic pathway called PGC-1 alpha. (3)

Advocates of the keto diet recommend adding apple cider vinegar to your diet after your body is in a state of ketosis. This can help to improve the function and efficiency of your mitochondria – that is, help your cells to produce more energy.

Essentially, apple cider vinegar can increase ketosis, which may be helpful for those aiming for a low-carb, high-fat diet.

Note: the keto diet is very low-carb is probably not the right choice if you are fighting a gut imbalance like Candida. It is likely to weaken your immune system and make you more tired.

A number of reports have suggested that ACV may help to lower ‘bad’ LDL cholesterol levels. LDL cholesterol is the form that contributes to inflammation and increases the risk of heart disease.

A 2006 study published in the British Journal of Nutrition found that ACV was able to reduce the total cholesterol in rats; an effect they believed to be due to the acetic acid in the vinegar.

More recently, a 2018 study conducted over 12 weeks examined the effects of ACV alongside a low-calorie diet. It was found that those who took apple cider vinegar ended up with lower triglycerides and total cholesterol than those who drank a placebo. They also had better levels of ‘good’ cholesterol (high-density lipoproteins) than ‘bad’ cholesterol (4).

Another report published in Bioscience, Biotechnology, and Biochemistry involved rats with high blood pressure. When the rats were given acetic acid, their blood pressure dropped significantly in comparison to those who were not given vinegar or acetic acid.

While more research is pending, it appears that ACV does have some benefits in reducing harmful levels of cholesterol while improving cardiovascular health.

Fungal infections are a common affliction in both adults and children, but women are especially prone. Candida albicans is one of the most prolific causes of fungal infections and often becomes resistant to pharmaceutical antifungal drugs.

Some research indicates that the maleic acid content of ACV that harbors bactericidal and fungicidal properties, while it has also been suggested that the acetic acid can permeate the fungal cell membrane and destroy the cell.

A study in the Journal of Prosthodontics investigated the effect of apple cider vinegar on denture stomatitis, which is often caused by Candida albicans. This study found that ACV demonstrated a similar minimum inhibitory concentration (MIC) to nystatin, the common antifungal for Candida. (5)

While it appears that ACV can make your body or skin less hospitable to yeast or fungus, more research is required to show whether ACV can actually kill Candida yeast in the human body.

Many adults suffer from indigestion due to low stomach acid. This can cause not only bloating and heartburn, but also more serious conditions such as irritable bowel syndrome and even small intestinal bacterial overgrowth.

While it may seem counterintuitive to use an acid to relieve indigestion, reflux is actually often due to the lower esophageal sphincter (LES) of your stomach relaxing too much. This causes gastric acid to move up into your esophagus, causing discomfort. If the acid in your stomach travels up through your esophagus, it causes a burning feeling known as heartburn.

Some research suggests that this sphincter is controlled by acidity. So, if your stomach isn’t producing enough acid, the muscles around the LES relax, causing more reflux. Apple cider vinegar is a moderate acid that may be able to reduce the pH of your stomach. In this sense, adding a mild acid may help to increase the acidity and thus prevent your stomach from triggering its own acid-producing functions.

You can try taking a small amount of apple cider vinegar in warm water before a meal to relieve the symptoms of indigestion and heartburn. Please note that this may not be suitable for those with gastroparesis. If you are taking medication, please consult with your doctor first.

While apple cider vinegar has plenty of health benefits, it should be used with caution by those with certain health conditions. Its ability to lower blood sugar levels could be problematic for those with diabetes, including those who take insulin. ACV may also reduce potassium levels in the body, so it’s recommended that you discuss using it with your doctor if you are taking diabetic medication or diuretics.

It should also be pointed out that those with gastroparesis or delayed gastric emptying may be affected by the potential for ACV to slow the passage of food through the stomach and small intestine. In these cases, ACV may make symptoms worse.

How To Choose A Quality Apple Cider Vinegar

When choosing your apple cider vinegar, look for a product that contains the ‘mother’. This usually means the cloudier,  the better! Unfiltered and unpasteurized apple cider vinegar will contain all the natural nutrients, enzymes, and trace minerals.

You can add your ACV to warm water and drink as a daily tonic. Diluting with water is more palatable and also gentler on the teeth and throat. Stir 1 teaspoon of vinegar with at least 8 ounces of water. Drink up to twice a day.

And of course, ACV is also great when used in salad dressings!